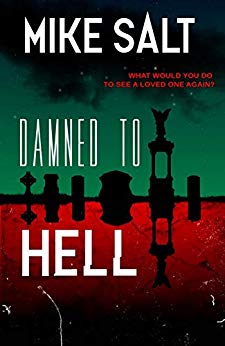 Bargain Horror: Tell us a bit about your new book, Damned to hell.

Mike Salt: Honestly, it has been something I’ve been thinking about for years. There isn’t a lot of things I wouldn’t do for any of my 3 children and that got me starting to put the pieces together that eventually became Damned to Hell. A father who is desperate to see his son again. He would do whatever it takes to just say a proper goodbye. I think it’s something that most parents can relate to… At least in concept ha.

BH: Your novel, Blind, won the 2018 inkshares competition. What was that whole experience like?

MS: Terrifying. I didn’t even know about the contest until it had been going for over a month of the two month contest. I looked at the contest and saw that the top 3 books would be considered “winners”, so I decided to see how far out I would have to work to make it to the top 3. First place had mid 90s in sales, second had high 80s… 3rd place was 23. I knew I had at least 25 sales in me, so I signed up that night and started bugging close family and friends. By the time I got to 25, 3rd place was around 50, so I bugged more people. It became a game of chasing that person and playing catch up. I literally worked every hour I had, messaging every person I knew.

There came a point when I ran out of people to bug and then I realized that to win this contest I would need to sell to people outside of my friends list on FB. It was stressful, talking to people I didn’t know and ask them to take a look at the novel. I think thats what the contest is really about… Earning it. Showing you have it in you to push until the end.

Once I pulled into first with less than a week left, it exploded. I didnt do much marketing that last week, it kinda just rolled along. Now that BLIND is with Inkshares its been really fun taking part in this process I’ve always dreamed of. Its nothing like I imagined, but it’s still very exciting. I can see what BLIND is going to become and it’s like I’m dreaming.

BH: You used to be involved in the indie comics scene. What made you switch over to prose?

MS: A couple things. I love comics, so it always something I thought I’d give a shot. But I wasn’t expecting it to be so political. There were some groups that felt like they didn’t want outsiders or didn’t welcome the idea of outsiders. It really rubbed me the wrong way. That being said, I also met some of the nicest people ever in that industry. Some of the most supportive people or ride or die people. But it was those select few that killed me.

Another part had to do a lot with the artists. I worked with some of the best indie artist I could find. I was very lucky in that aspect. Unfortunately, they worked backend with me and a lot of them would work on half a project with me and then get a paid gig offered and ask if they could back out. They were always nice about it, and I would never stand between an artist making money off their hard work.

At the end of it I had over a dozen projects that were almost done or at least half-way there and as a writer I couldn’t do much but watch it happen. I needed to have more control over my creations and thought of I made the switch to prose, id have no one to blame but myself.

BH: How different do you find the two mediums to work in?

MS: I was surprised how similar the process is. A lot of it is networking and finding a group of like minded people to work with. But prose is more of a solo journey… Nothing happens unless you put work into it. You are the only one to blame if you don’t make a deadline, or you don’t finish your draft. I like that.

BH: On the subject of comics, what is your favorite run, series, or single issue of all time?

MS: I still love Y: the Last Man. That series kept me itching to read each issue. I remember loving Civil War when it first came out, it was a pretty large event and I bought every issue, across every storyline… That was fun, but I don’t know how much I’d love it if I reread it.

I basically read mostly Image or IDW these days… I don’t have the energy for any Marvel or DC.

BH: What is it that draws you to dark fiction?

MS: I’ve always been a horror nerd. I watched Night of the Living Dead when i was 6 and ate it up. I hunted down the horror section at Blockbuster when i was a kid and would beg my parents to let me watch one.

There is something about finding something that can truly keep you up at night. I am hooked. I pine for that feeling again. To feel like I did the first time I watched Candy Man when I was a kid. I can’t say it happens often as an adult, but it’s at least entertaining. I want to create that for the people that read my work. Hopefully give someone something to think about.

BH: What are you currently working on?

MS: I’m working on my next novella, The Valley. I loved creating Damned to Hell, but it was a different type of horror than I tend to write. It feels good to be back behind the monitor working on something I think has potential to be creepy.

BH: It seems like you have a pretty busy life beyond writing-family, kids, and a military career. Any advice for aspiring authors who are having trouble finding the time to get their words on to paper?

MS: Just start. Get to work everyday and don’t make excuses. If it’s important to you, you’ll make it happen. Put an hour aside a night and just write. You’ll get better. The more time you put into it… The better your work will be. And also, as everyone says, read. Read everything.

BH: What do you most hope people will get out of reading your work?

MS: I just want to entertain people. I want them to finish reading my book and have a discussion with a friend or family member about it. At the end of the day, you read to escape and I want to help provide that.

BH: If you could have dinner and talk about books with any author, living or dead, who would you choose and why?

MS: Richard Matheson… I started thinking: “maybe I can write” after I read I Am Legend back in the 7th grade. I still love everything he put out. There is such a range in his writing, and the horror element is hidden sometimes behind a really interesting plot that you can’t stop thinking about. I would love to just sit and pick his brain. Someone alive though? Clive Barker… Because, you know, its Clive Fucking Barker. 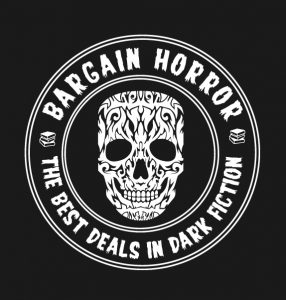