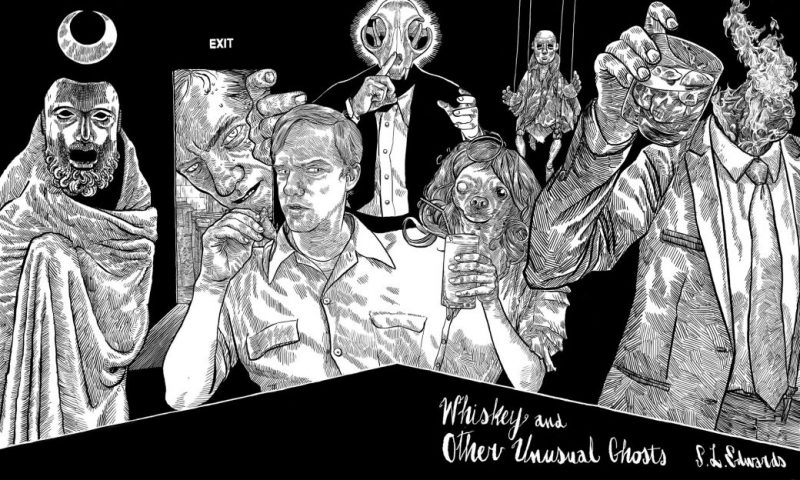 Bargain Horror:
Let’s jump right into talking about your collection, Whiskey and Other Unusual Ghosts. Is there a central theme to all the stories?

S. L. Edwards:
Perhaps not a “theme” so much as a “philosophy.” The way I view terror is as an emotion. No emotion exists in isolation. People are messy, contradictory. Our emotions even more so. So my central philosophy, my approach to the stories in Whiskey was this idea that if I removed the supernatural from the story, I would still be left with a horror story.

“Maggie Was a Monster” is about growing up with addiction in a dying family. “Volver Al Monte” is about cyclical political violence. Yes, both stories feature the supernatural. But both are very real, very relatable terrors too.

Two reviewers, however, brought to my attention that there are really two themes to Whiskey: (1) stories about growing up, coming of age and (2) stories about cyclical or political violence. And though that wasn’t quite my intention, I do think that is a mostly fair assessment. My next collection is going to have two halves, so maybe I just like to assemble books like that.

BH:
How has the experience of publishing a full collection been? Gehenna & Hinnom have a strong eye for talent, what was it like working with them?

SLE:
So far, so good. The horror community rallied around me when the book released, and reception has been pretty positive so far. Charles has been a great publisher, and really gave me free rein over who I wanted to enlist for interior and exterior art. So that was very nice too.

I will say that the version of Whiskey that readers have is not the first one I sent Charles. There were about two or three stories cut. Charles pointed out that they didn’t match the overall tone of the rest of the collection, and I think he was right. Those stories have been put off for “The Death of An Author,” which will be coming out from Oxygen Man Books in 2020.

So far, I haven’t had any pushback on including those two. But we will see.

BH:
You’re fairly young for someone writing in weird fiction circles. Has that affected your career or your interaction with older, more experienced authors?

No one has looked down on me or tried to run me off. Quite the contrary, my biggest advocates and supporters have been the more experienced writers. Sam Gafford, who I think we all still miss, was far more welcoming than he had any need to be. I’d mention more “older” writers but I don’t want to make anyone angry. Besides, John writes about WWI so well that I imagine he may have been there.

I do think, though, that I will always be a “young author.” I think anyone below thirty-five is. Until a younger, prettier author comes along to dethrone me. Which I fully expect Brian O’Connell to do any day now.
I see you, Brian. I *see* you.

BH:
How do you personally define weird fiction?

SLE:
Hrm. Good question. I hadn’t really thought of it before.
I suppose I would say, “horror with an ambiguous bent.” I’m not sure if that definition will get me in trouble or not.

I of course, like I believe most of us, cut my teeth on Lovecraft. In terms of “the Weird.” And what I took away from it was a pervasive sense of despair, of dread and terror. What makes Cthulhu so terrifying isn’t his octopus head, but the idea that this massive thing is out there and that human beings are so terribly, terribly small. This notion that so massive could be so well hidden from normal people, that there is this secret truth just beyond our line of sight and that this truth is NOT comforting.

And that’s what I mean by this “ambiguous bent.” In a good weird story, readers aren’t privy to the whole truth. They get a glimpse of it, but they’re not going to fully understand the story. There’s no neat A-to-B connecting the plot monster story. Instead, there are just enough pieces of information to make clear that there is some grand or small conspiracy against the characters and against the reader themselves.

BH:
Outside of horror and weird, what are your literary influences?

I like books with big, grand sweeping views of history and a diverse cast of characters. Dr. Zhivago, War and Peace, and Life and Fate are some of my favorites. These are books where the characters go through major, profound changes. I like those stories, where the cast is forced through this meat grinder of events and emotions. Where the whole world seems to shatter and there’s this mad dash to stay alive.

BH:
Your work has a political element to it. Do you approach a story primarily as a piece of art influenced by your insights, or do you craft stories around messages or issues you wish to address?

SLE:
Ha! While I have grown more comfortable in talking about my work, I’m not sure I’m ready to call it “art” just yet.

Honestly though, the answer is neither. The story is usually crafted around characters first. For example: I recently sent off a story that is really centered only on two characters, a young revolutionary and an older head of the movement. How these two perceive each other, and the struggle they are in is the core of the story. The “politics” stems from how these characters experience the context of war, their visions for the future and their ambitions beyond the battlefield, along with the dynamics of power between them.

That’s the same for my other “political” stories as well. For instance, Manuel of “Cabras” is an old guerilla fighter, a man who has had his tongue cut out by a paramilitary death squad. How he perceives the world is much different than General Alfonsín Santos of “Volver Al Monte,” who is a decorated and retired war hero at the beginning of his story. These two men are very different, and thus will have very different things to say about their environment. They will have different emotions, and as a consequence different political views on the matter.

BH:
Is there any one author that directly inspires your work?

SLE:
Not any one in particular, though I think Boris Pasternak has cast the longest shadow over my work.

BH:
If you could have dinner with one literary figure, past or present, who would it be?

SLE:
Who was the richest one? I’d like to be a mooch if at all possible.
No, wait-Ambrose Bierce. (1) How hilarious would Ambrose Bierce by at dinner? (2) Maybe he would finally tell us all how he died.

BH:
What are currently working on and what can we expect to see coming from you down the road?

SLE:
A few things: (1) Two new collections. “The Death of An Author” collects my “horror for fun stories.” These are my pulpier stories, focusing on classic and known monsters. Dracula, zombies, even the Lovecraft mythos. Then “Monsters of the Sea and Sky” is…well, it’s something different. It focuses on secrets. On “conspiracies.” And these conspiracies range from family stories to hidden massacres. The ghosts of dictatorship.

Then (2) I am working on a novel. This is a new process though, and very stop and go. It will be a long time, I imagine, before the story is complete. But readers should imagine “The Shining” on the eve of the Pinochet Coup in Chile.

BH:
What do you hope readers get out of your writing?

SLE:
I hope you have fun. I hope you enjoy yourselves. I hope I make you cry, and I hope you don’t hate me for it.

You can grab your own copy of Whiskey and Other Unusual Ghosts here!